On Monday, workers at dnata, which supplies frozen meals to businesses including Qantas, were told they would not be eligible for JobKeeper payments due to changes made by the Federal Government on May 1 that excluded “sovereign entity” employers.

This meant dnata workers were no longer eligible for JobKeeper because the company, part of the Emirates Group, is owned by the Government of Dubai.

The move has devastated workers, some of whom worked for Qantas for decades before the airline’s catering business was sold to dnata just two years ago.

“We just all feel that that is wrong,” one dnata worker, who did not want to be named, told news.com.au.

“We pay our taxes, we are Australians.”

Dnata has operated in Australia since 2007 and employs about 6000 staff every year at nine Australian airports. The Australian Competition and Consumer Commission (ACCC) approved dnata’s purchase of Qantas’s catering business in 2018.

“Dnata enrolled for the scheme and implemented plans for the retention and payment of our Australian employees on this basis,” she said.

“We are surprised and disappointed by the Government’s decision to retrospectively amend the JobKeeper legislation.

“This change, at short notice and backdated to 30 March, excludes dnata, an employer of 6000 Australians from the JobKeeper scheme.”

Dnata employees have been left in the lurch after the change. Picture: Tracey Nearmy/Getty ImagesSource:Getty Images

Dnata says the Morrison Government’s amendment to the JobKeeper program puts more than 4500 jobs at risk, and also leaves employees and their families without an income on extremely short notice.

Dnata said it had temporarily stood down 4000 employees due to the COVID-19 outbreak.

The dnata worker told news.com.au they had been stood down since March 30 with no income unless they took annual leave or worked a small number of shifts that were on offer.

“After seven weeks, I worked for two days and I’ll get another three days of work,” the worker said.

The worker said they had started the registration process for JobSeeker more than a month ago but stopped the process after learning they could get JobKeeper instead.

They had been relying on getting backpay for the past month but it’s unclear whether they can get any backpay on the lower JobSeeker payment, or whether they will even be eligible for it as it excludes people whose partners earn over a certain amount.

The worker said it was a “kick in the guts” to find out they would no longer be eligible for JobKeeper.

“To be told after a month, when people are relying on this money, it’s just not right,” the worker said.

“I was happy to go to work even though $1500 (from JobKeeper) meant I was still losing money.

“We were quite happy to do that and stay in contact. We are still in shock.” 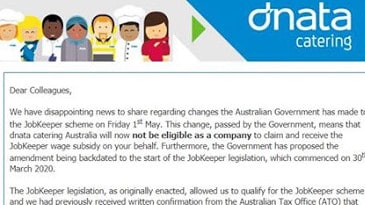 Dnata told its employees on Monday they would not be eligible for JobKeeper.Source:Supplied

The Australian Services Union (ASU) said the Morrison Government changed the definition of “sovereign entity” in the JobKeeper rules last week to exclude employers if they are 100 per cent owned by a foreign government, even if they are an Australian resident company.

“In this case, dnata are 100 per cent owned by the government of Dubai,” a statement from the ASU said.

Before the recent amendments dnata was eligible because it was an Australian resident company for tax purposes.

A Treasury spokeswoman said a “sovereign entity” was not a qualifying employer for the purposes of the JobKeeper website.

“Government employers are considered to have a greater capacity to support their employees through this period than private businesses,” the spokeswoman said.

The dnata spokeswoman said the outcome seemed unreasonable because dnata is incorporated in Australia, employs a large number of Australian workers, represents a substantial investment in Australia, and is an Australian resident company for income tax purposes.

The dnata spokeswoman said the company would now be forced to review the medium and long-term viability of its various Australian businesses including catering, cargo, ground handling, retail and hospitality.

“Although unintended, the amendment to the Jobkeeper legislation will create an uneven playing field in the airport handling and catering sectors as none of our competitors have been excluded from the scheme,” she said.

“We are not asking for anything more than our competitors will also be receiving through the JobKeeper scheme.

As an Australian resident company, the spokeswoman said dnata paid corporate, employee and social taxes and various other contributions to the Australian Government. She said dnata had invested $300 million in people, infrastructure and technologies in Australia over the past 13 years, including the $150 million purchase of Qantas’s catering businesses and the opening of a $6.5 million catering facility in Canberra in 2019.

“We urge the Government to reconsider the amendment of the Jobkeeper legislation, enabling us to retain our employees and reinstate services when domestic and international travel resume,” the spokeswoman said.

“Our services are critical to maintain the aviation supply chain and the flow of essential goods, and ensure safe operations of domestic and international flights.”

“We are working closely with unions and other partners to provide all possible support to affected employees in this situation.”

Shadow Treasurer Jim Chalmers said there was too much uncertainty among the business community about how to make themselves eligible for JobKeeper.

“As a consequence of that and in addition to the fact that too many Australian workers have been excluded from this scheme, the unemployment queues will be longer than they need to be,” he said.

Have you been affected by JobKeeper changes? Contact @charischang2 | charis.chang@news.com.au