Sky News Weather Chief Meteorologist Tom Saunders said the “heaviest rain in years” is starting to fall across many parts of the NSW coast this morning after lashing southeast Queensland over the past 24 hours.

“This major weather event will continue into the weekend,” he said. “Moisture from this system has been spreading south over the last 24 hours, even reaching the Victorian border.”

Queensland was the first to cop a hammering overnight. Tin Can Bay, in the Gympie Region for example, has already had 300mm of rain.

He said the rain is being caused by a very humid north-easterly air stream that’s “pumping” moisture to inland areas and even providing some “major drought relief” from some stricken towns.

The deluge is expected to impact more than ten million Australians living between Rockhampton and East Gippsland. Picture: WindySource:Supplied

For today and tomorrow, that means the north coast of NSW will be hit with possible flash and river flooding with up to 500mm tipped to hit.

The system is then forecast to veer south and spread over the length of the NSW coast.

Mr Saunders said it should be the wettest week for Sydney since March last year.

The downpour could also mark the heaviest February 24-hour rainfall in Sydney since 2002 – when 130mm of rain was recorded on February 5.

“There’s going to be a huge amount of rain,” he said. “It’s enough to extinguish some of the larger bushfires but not hard enough to fill up the dams, considering how dry the catchment has been.”

As of 11pm last night, there were still 62 fires burning across NSW. The RFS warned the fire season is not over, despite the widespread rain.

At 11pm there are 62 fires burning across NSW.

The Scabby Range Fire in remains at Watch and Act alert level, due to spotting in the Yaouk Valley area.

The Fire Season isn’t over yet. Have a plan in place and know what you will do if fire were to threaten.#NSWRFS #NSWFires pic.twitter.com/kCKE4ZURNL

In Queensland, the wet weather will persist for the next eight days, with the southeast being the worst hit.

Many areas, particularly the coast, will see well over 100mm of rain over the next seven days.

Forecasters expect over 150mm of rain to fall on the Sunshine Coast alone, and on the Gold Coast and in Brisbane.

Meanwhile in WA, a severe heatwave being caused by a north-easterly air stream is taking temperatures higher than 40C in the state’s inland regions. 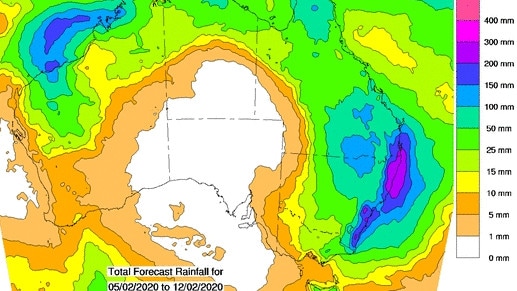 However, a cooler change from the west is pushing onto the coast, expected to drop temperatures today, when a tropical low should become a cyclone off the state’s north coast.

Mr Saunders said there’s a “fair amount of uncertainty” regarding the future track of the weather system, but it looked like the most likely scenario is that the cyclone would head toward the northwest coast over the weekend.

Back in NSW, Bureau of Meteorology have warned that flash flooding is possible when there is rapid rainfall, and residents in areas subject to flooding should keep up with the forecast.

“Our focus will be the Northern Rivers and Mid North Coast areas, as well as further south later in the week as the weather tracks towards the Sydney Metropolitan area and the south coast,” Mr Austin said.

“Across those areas we are preparing for the possibility of flooding if rainfall levels are significant, in which case homes and businesses may be impacted. Preparing now for a flood can save lives and minimise the damage to property and possessions.”

For the latest weather and warnings, information visit https://t.co/ZwwnxWJFoM and follow advice from emergency services. pic.twitter.com/uBjtCUaEut

Here’s a look at the forecasts in the nation’s capitals.

Sydney will see a minimum of 10mm forecast to fall each day, and temperatures not expected to exceed 27C. The heaviest falls are expected on Sunday, with up to 60mm anticipated and the chance of thunderstorms.

Melbourne is in for a mostly sunny weekend, with the mercury getting as high as 30C on Saturday. The likelihood of receiving some rainfall will increase from Friday, with possible showers and thunderstorms forecast from the weekend into early next week.

Brisbane has a wet seven days ahead, with showers forecast every day and up to 70mm expected to fall in the city on Thursday.

Further south, Hobart isn’t likely to benefit from any wet weather until Saturday, with possible showers forecast into the weekend.

After horror fire and extreme heat conditions last week, Canberra will get some relief over the weekend, with showers forecast from Friday onward.

While Adelaide won’t see any wet weather in the coming days, showers and thunderstorms in Darwin will continue into next week.