Extraordinary footage has emerged of the 31-year-old wearing a school uniform with an infant perched on her hip and a trusting little girl trailing behind her.

It has since emerged a Pascoe Vale couple hired Azzopardi two weeks earlier as a live-in nanny for their daughters aged four and 10 months.

The parents had no idea they had entrusted their children with Australia’s most notorious fraudster.

According to Nine News, which obtained the clip, Azzopardi allegedly told the couple she was taking the girls to Geelong for the day but took them to Bendigo instead.

Police were called after Azzopardi walked into a headspace mental health centre last Friday and was recognised by a member of staff.

Samantha Azzopardi is seen knocking back a carton of milk with a baby perched on her hip and the infant’s four-year-old sister in tow. Picture: Nine NewsSource:Supplied 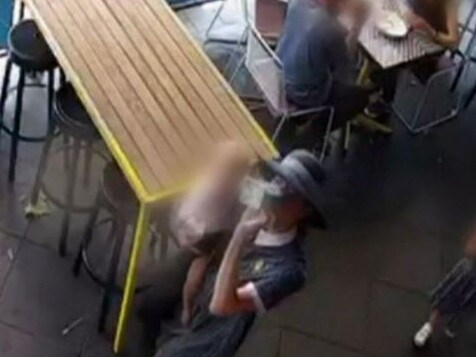 The parents of the children in Azzopardi’s care had no idea they hired Australia’s most notorious conwoman as an au pair. Picture: Nine NewsSource:Supplied

Officers caught up with the Sydneysider inside a Myer department store at 1.30pm, charging her with offences ranging from child stealing to giving police a false name, handling stolen goods and forging documents to secure employment as an au pair.

The stolen goods charge relates to a passport and drivers licence she was found with in July that belonged to a Melbourne woman.

The astonishing video clip, taken in a cafeteria area, shows Azzopardi knocking back the contents of a milk carton as she carries the 10-month-old while the infant’s four-year-old sister follows behind.

Dressed neatly in a blue and white school uniform complete with hat, she carries off the look of a student half her age effortlessly.

Azzopardi has been accused of conning authorities across three continents, amassing more than 40 aliases in just five years.

In 2013 she was busted allegedly posing as a child sex trafficking victim in Ireland after authorities released her photograph in a desperate bid to identify her.

Child abuse specialists in Dublin had spent weeks trying to coax information out of the girl they believed was so traumatised she’d been left unable to speak, only to be informed she was a con artist from Sydney in her mid-20s. Irish police released this photograph of Samantha Azzopardi posing as a teen sex trafficking victim in 2013 in a desperate bid to identify her. Picture: Dublin policeSource:Supplied 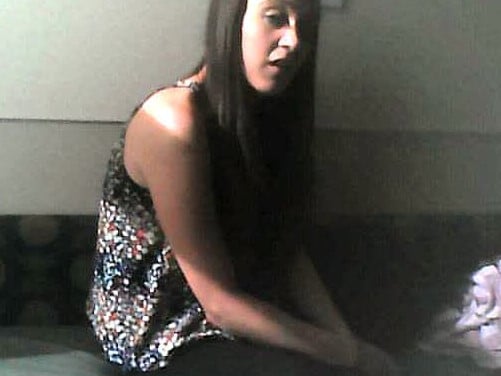 In this photo taken by Canadian police, Samantha Azzopardi poses as a 14-year-old victim of sex abuse and torture. Picture: Calgary Police ServiceSource:Supplied This poster warning people to watch out for Samantha Azzopardi in Melbourne has been doing the rounds on Facebook. Picture: FacebookSource:Facebook

She later washed up in Canada where she claimed to be a 14-year-old and a victim of abduction, sexual assault and torture.

By July this year she was linked to a string of new scams in Australia, including allegedly posing as a talent scout and conning a 12-year-old girl into performing a bizarre series of tasks.

On Wednesday, Azzopardi was a no-show at court for the second day in a row.

According to The Age newspaper, she remains at hospital where she is undergoing unspecified medical treatment after having been admitted for an MRI scan on Monday.

She has refused to co-operate with police since her arrest.

“A lot of outstanding matters would possibly be resolved if she’s forced to provide that information.”

Azzopardi’s lawyer Alex McLennan made no bail application and said his client would remain in hospital for the time being.

Magistrate Ross Betts granted the police application for the DNA testing and photograph and adjourned the matter until November 20.